WHAT INSPIRED UNDER A NAMIBIAN SKY? 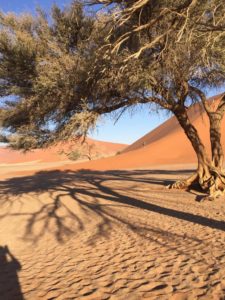 For as long as I can remember, I’ve had difficulty sleeping. It’s a serious issue for me and others who suffer from insomnia. Over the years, I’ve learned to live with it and tried to adjust my lifestyle to incorporate it rather than fighting it. I discovered insomnia has its uses.

Around two o’clock one morning, unable to sleep, I switched on the television. As I flicked through the channels, I came upon a BBC Four documentary in which literary novelist, Stella Duffy, took on the challenge of writing a romance for Mills and Boon (Harlequin in the US).

I believe it was part of a celebration of their one-hundredth birthday and a re-run of an earlier program. What fascinated me, in particular, was how impactful romance had been and continues to be, on society and on women.

Perhaps it’s not surprising, but I hadn’t realised romantic fiction is written primarily by women for women. Most other art forms have been created and/or developed by men. But romantic fiction looks at the world through the eyes of women.

Romance novels have changed drastically over the years and not all romance readers are women. But the vast majority are. I suspect there are as many reasons people read romantic fiction as there are genres and subgenres of romantic fiction in the world.

It soon became clear from the documentary that writing romantic fiction was rather more difficult than I’d imagined it to be.

Mills and Boon know a thing or two about romance novels as they’d been in the business so long. Perhaps that’s why they’re so difficult to please? They know instantly whether a romance novel will appeal to their readership.

Many have tried to write romances and have failed. But there is good news. Dedicated courses are on offer and reading as many good romance novels as you can, also helps. And the program showed Stella Duffy joining specialist romance writers’ courses and her progress as she wrote her first romance novel.

I thought starting to write a romance novel sounded like a great idea because the early morning hours is the time when all great ideas are born, isn’t it?

Visiting Mills and Boon’s website, I learned they required three chapters and a synopsis to gauge my suitability as their next superstar romance novel writer. When I read they were keen to find writers who were born in Southern Africa or who wrote novels set there, I thought I’d scored the jackpot. Being from Namibia and having lived in South Africa, I had at least one of those two requirements in the bag. I read their guidelines and sat down to write a story I’d like to read.

Over the following days and weeks, I agonised over it, re-wrote it multiple times, dreamed about it, talked about it to anyone who’d listen, and sent it to all my closest friends for their brutally honest opinion.

Satisfied I could do no more, I hit the submit button and started to write something else. To my utter surprise, I received a long email back from them, expressing interest in my story but asking for changes. I duly implemented the changes, again driving my poor friends loopy with my requests to check even the smallest changes until I felt I had something Mills and Boon might like enough to commission.

But a few weeks later, when I received a short rejection email, the characters in Under A Namibian Sky started to scream at me, as characters so often do. They were alive and wanted to live in the world. They wouldn’t be denied. 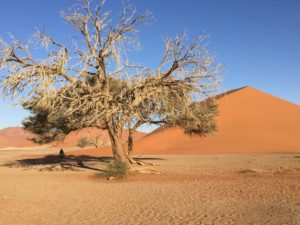 It brought me immense pleasure to revisit the world I’d known in my youth. Writing Under A Namibian Sky felt as though I was on holiday in Namibia. I could feel the sun on my skin, breathe in the dry, hot air, and see the vastness of the desert in my mind’s eye as I wrote. I know the people, the characters – several are based on dear friends and family members. But I took a few creative liberties here and there, and those who know Namibia well will recognise where I’ve endeavoured to make the story more exciting, more dynamic.

Under A Namibian Sky isn’t a Mills and Boon novel, but a story that looks at love on many levels, and the first in my Desert Love series.

I’ve been delighted that readers of this novel wanted to know more and it’s a real pleasure to return to Namibia to write the rest of the stories in the series.

Won’t you join me?

Making a case for romance novels

Can you see me?